Welcome to Morning Coffee, a series from Bamboo Crowd in which we showcase the brilliant people we’ve had the opportunity to work with. So brew yourself a cup and cozy in to hear stories from people who’ve landed their dream roles, from the exceptional folks who support our clients, and from our own mighty staff here at Bamboo Crowd. We’ll talk about everything from how they take their coffee (yes, we ask this) to what they’re seeing and doing in their new roles and the industry at large. 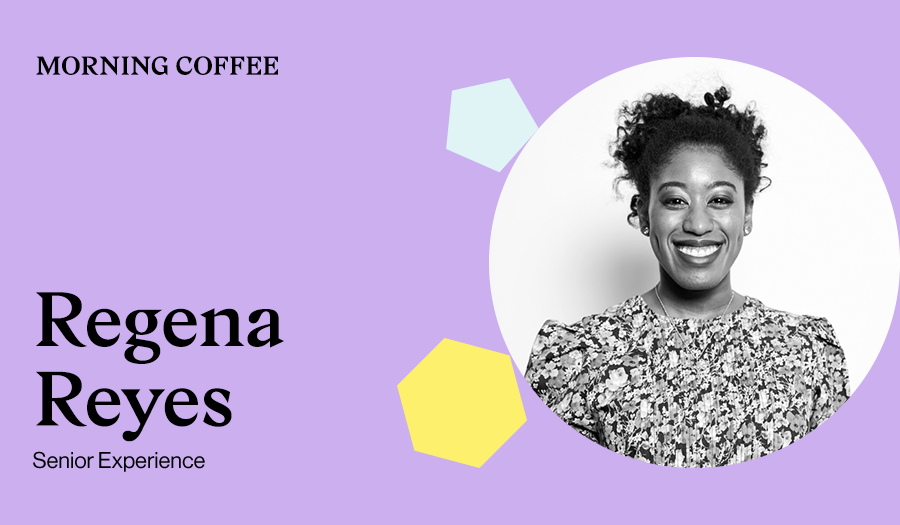 We spoke with Regena Reyes, who will soon start as the Senior Experience Consultant at Proto, a “plucky and promising” innovation consultancy. Regena’s morning routine consists of instant coffee, the Whole Foods brand in particular. “I like one teaspoon with half a teaspoon of sugar and a splash of oat milk,” she said. It’s a specific order, but then again so was Regena’s job search. She knew exactly what she’d wanted in a role, and she looked to Bamboo Crowd to help cut through the noise and land at Proto.

It was perhaps a clever interview with Proto that sealed the deal for Regena Reyes. She had been searching for a position for some time. “I was pretty adept at the kinds of questions I would be asked in an interview, the kinds of cases I would be given,” Regena said. During the last round of interviews, Proto asked Regena to design an ATM machine for five-year-olds. “I was like, I’ve never thought about that.”

By contrast, let’s take the questions and cases she was getting from other agencies. “They were asking me to dream up a partnership between a start-up company and an incumbent, like a major enterprise, and I was like, yeah, we did that a lot in 2015,” she said. “It was something I had done in business school, in undergrad.”

Prior to accepting the Senior Experience Consultant position at Proto, Regena worked in more traditional consulting roles for some pretty big companies, including IBM and KPMG. It was at IBM, where she was working as a tester for an enterprise banking application, that she had a real “aha” moment.

I thought that having design as a skill set would be useful when I was working as a tester. I realized that there is a gap between what the designers do and what the engineers can implement, and I really found that gap fascinating.

So, after some self-study, Regena enrolled in a multidisciplinary MFA program for Products of Design at SVA, a two-year, immersive program that prepares people for leadership in the shifting terrain of design.

“My experience at KPMG told me that we really, really needed design, especially when you're working with enterprise technology and artificial intelligence as I was,” Regena said.

Following the Master’s program, Regena began a nearly eight-month job search. She’d found innovation consulting positions but they “weren't such a great fit for me because they felt like something I've already done before,” she said.

“What people don't know about consulting is that we do a lot of design research, even if you don't call it design research,” Regena said. Her experience included about six years of interviewing, ideating, and prototyping with clients, all “without being called a designer,” she laughed. “A lot of innovation consulting really just looks like consulting with design thinking on top.”

Navigating the Right Direction:
with Bamboo Crowd as a Compass

Regena wanted more. She wanted a role that would allow her to leverage the learning and experience she achieved in graduate school. What Regena needed was a discerning and knowledgeable ally to help distinguish the consulting roles from the design-based roles.

So Regena turned to Bamboo Crowd. (And we’re sure glad she did!) She worked with Alex Pavlou, one of the agency’s co-founders. “I really liked how he took the time to get to know me and what I was looking for,” Regena said. She shares that Alex was adept at surfacing different types of companies, in her quest to find the perfect “crossroads” position: not quite traditional consulting, but also not quite traditional brand design.

“Alex was really good at saying, I think this company is generally within your scope, however, they might be more like X or more like Y. Maybe you might like this one more or this one less,” Regena said.  “But that was only after he'd given me the opportunity to research them myself, so he wasn't forcing on his opinion. He was like, based on our conversations, I think you might like this, this, and this.”

When the name Proto came up, “I had no idea Proto was a thing,” Regena said.

Alex was the one that brought [Proto] before me, as well as several other companies that I was very interested in. It was really value-added that he helped me to see what was there, in a landscape. I had no idea what I was walking into, and I was completely prepared to fight through it alone. But I had someone to help me. 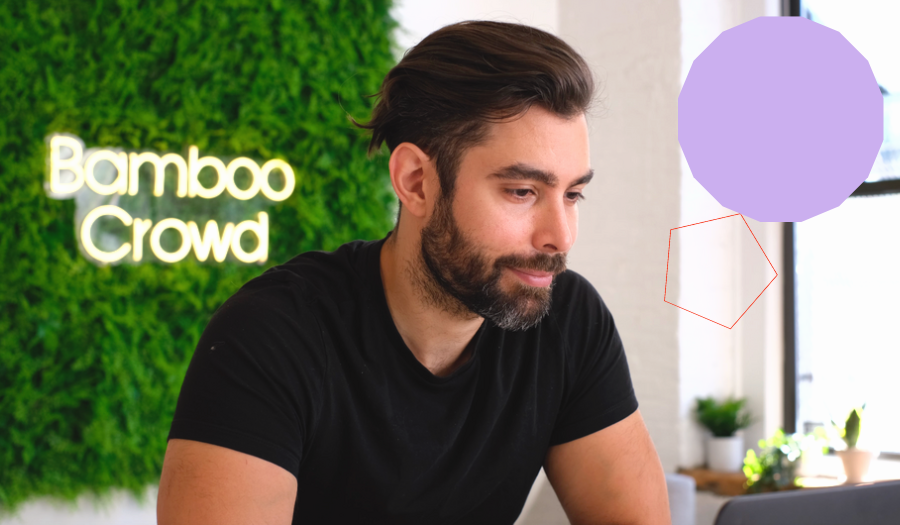 However, it wasn’t easy to glean this high-level “landscape” of a given agency through the narrow lens of the application process, especially when a company was new and unknown to her. To this end, Bamboo Crowd opened Regena’s eyes to see what was possible, and “why certain companies are better for me as opposed to others,” she said. “It felt like I had a compass.”

From a Memorable Interview Question to a Meaningful New Position

Let’s think back to Regena’s interview with Proto, in which they tasked her to design an ATM machine for five-year-olds. “I was blown away by the case as well as the team and people. I didn't expect to really jive with the Chief Operating Officer. I was like, wait, I would love to work with you on something. I'm super curious about what you do every day," she said.

“Because they're a start-up, they're a small company. I'm really looking forward to learning more about how the company runs overall, as well as working with those officers to streamline some things and implement new processes,” Regena said. 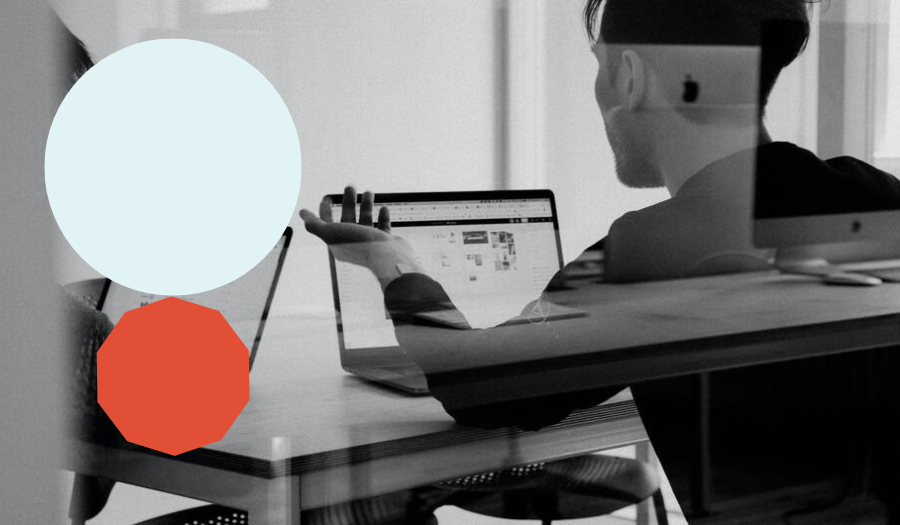 “It was really great to have Alex to bounce ideas off of, and I think that was the biggest pain point that Bamboo Crowd resolved for me,” Regena said. This includes the all-too-familiar post-interview feeling of, do they like me? Do I like them? Alex was able to provide timely and keen insights throughout the entire interview process, so Regena never experienced that lost-in-the-dark feeling that arises when companies are slow to follow up or move to the next steps.

We asked Regena if she had any advice to help others navigate the transition from traditional consulting into innovation and design.

“The thing that a person needs most in innovation consulting is comfort with ambiguity and having strategies for navigating it,” Regena said. But don’t worry about a solo journey. “You're going to do this with a team, you're going to do this with your client, ideally, if you're using participatory design methods, and you'll be figuring out together, you'll be way-finding together,” Regena said.

You will need to accept that there is no road map. Maybe you only know the next two or three steps, and then once you get to the next first step, then you realize you need to change directions. I think that is the key mental frequency.

Ready to transition into a new role yourself? We’d love to help you find and field the best interview question you’ve ever received, just like Regena. Designers, job-seekers, or just plain curious people can register for the insider scoop here. 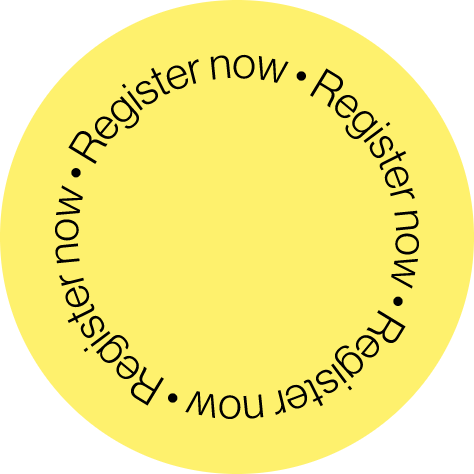